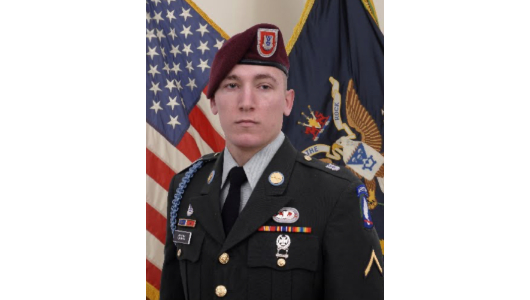 In letters read at the service, Capt. Benjamin Nagy and 2nd Lt. Kevin McDonald wrote that during the assault, Cook’s unit was pinned down. Cook, already under attack, moved from cover to a less-secure location to provide better support for his comrades. “You selflessly exposed yourself,” wrote McDonald, the platoon leader. “Many of us here today simply would not be here” without Cook’s action. PFC Cook was posthumously awarded the Silver Star Medal for his selfless bravery that day.

The workout was created by Jonathan Noonan together with all the members of PFC Cook’s platoon.

– Box Step-Ups represents the mountains of Kunar, Afghanistan, his home in Montana where he loved to snowboard, our hilltop Observation Post at COP Monti, and Monte Berico a frequent hill run route at our home station in Italy

– Pull-Ups represent the mandatory exercise for any Airborne soldier

– The cash-out Push-Up is a tradition of any Paratrooper or Airborne Ranger as a way to pay tribute to those that paid the ultimate sacrifice. Tradition dictates that you mu